Create an Account - Increase your productivity, customize your experience, and engage in information you care about.

The North Fayette Municipal Authority oversees the operations of staff responsible to expand and improve the water lines and service. 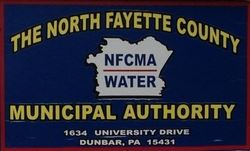